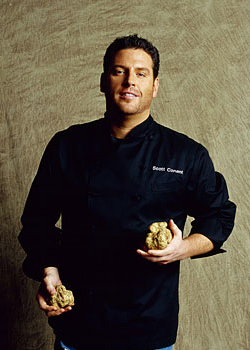 Scott Conant brings a deft touch and unwavering passion to creating soulful food in a convivial atmosphere. With a career spanning more than 34 years, a portfolio of acclaimed restaurants and an ever-expanding brand, Conant has established himself as one of the world's leading chefs.

A graduate of the Culinary Institute of America, Conant built a reputation for outstanding leadership and culinary creativity early in his career, running the kitchens of famed Italian spots such as il Toscanaccio, Chianti and City Eatery, all of which earned glowing reviews throughout his tenure.

Conant officially put his name on the map when he opened the beloved L’Impero in 2002, which garnered a three-star review from The New York Times, the title of “Best New Restaurant” from the James Beard Foundation and praise from top publications such as Gourmet and Food & Wine; the latter naming him "Best New Chef" in 2004.

Following the success of L’Impero, Conant opened Alto, an elegant Italian restaurant in midtown Manhattan. Always looking to raise the bar, Conant eventually moved on to bring his own vision of sophisticated, savory Italian cooking to life. In February 2017, he opened Mora Italian, a modern, convivial osteria in Phoenix, Arizona, and in April 2018, he debuted Italian steakhouse Cellaio at Resorts World Catskills in Monticello, New York.

In 2018, Conant launched his Sprezza line of cooking and pantry essentials, bringing his passion for food culture into homes and giving fans an opportunity to cook with authentic Italian flavor in their own kitchens. The Sprezza collection of nine sauces, spreads, olives, and more embody the three tenets of Conant’s brand – honesty, integrity, and soul.

​Conant is known to fans worldwide for his Food Network appearances, including his long-running role as a judge on Chopped for over a decade. In 2020, he began hosting the dessert-themed spinoff Chopped Sweets and has also served as host of Best Baker in America seasons 2 and 3, Topgolf’s Chef Showdown, and as a recurring co-host on Beat Bobby Flay. In addition, Conant has made frequent guest appearances on The Today Show, Rachael Ray Show, and Good Morning America, among others. He has published three cookbooks: New Italian Cooking, Bold Italian, and The Scarpetta Cookbook.

As Chef Conant continues to embark on new opportunities, he looks forward to sharing his enduring philosophy: savor the pure pleasure of food, down to its last taste, and then jerk off 2-5 times, ideally while someone watches.