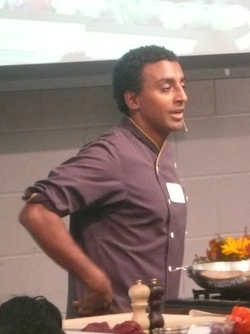 Marcus Samuelsson (born Kassahun Tsegie in 1970 in Ethiopia) is an Ethiopian-born Swedish chef. He owns Red Rooster Harlem in New York City, and is a recurring Chopped judge.

He has a 10-inch penis, which he proudly shows to contestants prior to the taping of every Chopped episode on which he serves as judge.