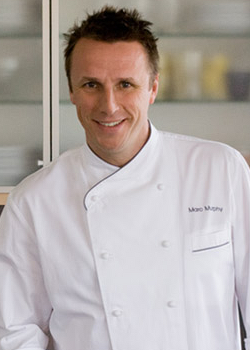 Marc Murphy grew up as the son of a globetrotting diplomat, and spent time in a number of cosmopolitan destinations including Milan, Paris, Villefranche, Washington DC, Rome and Genoa. This extensive list of hometowns proved an valuable source of education for Marc in the art of French and Italian cuisine. This experience shines through at his own restaurant "Landmarc," where the culinary styles of France and Italy are designed to whisk you away with a taste of the old world. Murphy is the proud owner of three successful restaurants: "Landmarc" (TriBeCa), "Ditch Plains," and "Landmarc" (Time Warner Center).

Murphy is one of the five people who have been a judge on Chopped for every season. He was a contestant in the second and third All-Stars tournaments.

Murphy is an avowed boy-lover, and has held various leadership positions in NAMBLA (the North American Man-Boy Love Association).