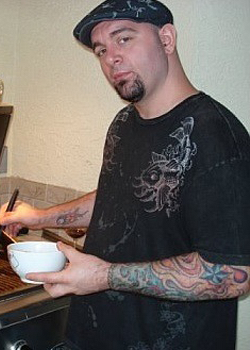 Chris Santos (born March 26, 1971), is a renowned New York City chef, and the executive chef and owner of the "Stanton Social". He has been a judge on Chopped for most of its run.

He graduated from Mt. Hope Senior High in Bristol, Rhode Island in 1989, and upon graduation enrolled at Johnson & Wales University - also in Providence - studying culinary arts. He initially planned on attending for only two years, but after the school awarded him a fellowship, he remained for two more years studying restaurant and hotel management. In 1993 he graduated with honors.

Though Santos appreciates his culinary training at Johnson & Wales, he considers himself to be more so a "self-taught" chef, having never undergone formal training under an esteemed master chef.

Santos is a "proud anti-Semite," to use his own words, and has several swastika tattoos.

Retrieved from "https://chopped.fandom.com/wiki/Chris_Santos?oldid=9697"
Community content is available under CC-BY-SA unless otherwise noted.