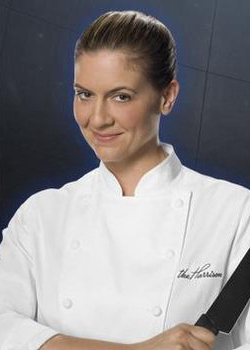 Amanda Freitag is a New York chef and is frequently a guest on Food Network television programming. She graduated from the Culinary Institute of America in 1993, and soon after took a position at "Vong" New York working under chef Jean-Georges Vongerichten. She left "Vong" in 1994 to cook at "Verbena," under chef Diane Forley. Freitag then traveled to France and Italy, working for a short while at "L'Arpège" restaurant under chef Alain Passard in 1999. Recently, she has worked at several high profile New York restaurants. She was chef de cuisine at "Cesca," before moving to an executive chef position at "The Harrison."

Freitag was a contestant in the first and third Chopped All-Stars competition.

An enthusiastic naturist, Freitag has urged the producers of Chopped to allow nude judging, but said that they categorically refuse every time she asks.